Manager, The Gallery of Fine Craft

When I first met Eric Goldschmidt in 2017, he was a Featured Presenter at the International Flameworking Conference at Salem County College. I was struck by his “Cage Cup” Series. These goblets and vessels feature fragmented face imagery surrounded by twisted vine-like “cages.” These cages create a more in-depth narrative beyond their traditional silhouettes. Eric has stated that this series is a “metaphor for the cages that we become entrapped in within our lives.” They draw the viewer in to find the deeper narrative.

Eric’s other line of work includes a series of elegant lidded goblets. Each has a removable lid accented with a delicate finial. The color palettes range in color from green to blue to purple. The set we are showcasing in The Gallery is a rich smoke gray color. They are truly stunning in the natural light of our bay window.

I always look forward to seeing what fantastic and inventive new work Eric will create next. 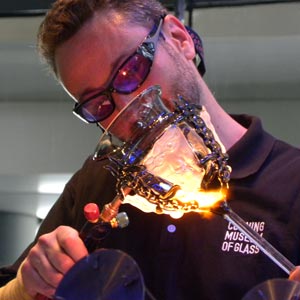 Since 1996, Eric Goldschmidt has devoted himself to practicing and developing hot glass techniques with a focus on flameworking while studying and assisting with many of the world’s most talented glass artists. Although he has been working with glass since 1996, Goldschmidt started working with molten materials in 1993 as a candlemaker. However, after witnessing flameworking, he became intrigued by the process, which led him to take classes from master flameworkers at The Studio of The Corning Museum of Glass. He was soon hooked and began working at The Studio in the Make Your Own Glass Workshop and as the resident flameworker. Now, as the properties of glass programs supervisor at the Museum, he gives live demonstrations in flameworking, glass breaking, and optical fiber, in addition to teaching, lecturing, and exhibiting his work around the world.